This has been a year of intense activism focused upon water and indigenous rights in general, and we at the Overpass Light Brigade have tried to use our visibility to give focus to these issues. Last January hit hard and cold and the freezing weather was a match for the frozen hearts of our state legislators who tried to put forward rapid fire bills that would allow landowners and business to dig up ancient Indian burial mounds, as well as bills to allow the privatization of municipal water service and supply. What could possibly go wrong with such forward thinking policies?

Multiple tribal bands and regional Indian nations converged on the State Capitol in protest of the proposed burial mounds bill. On that same day, we worked with some indigenous friends to hold a message at an important, and generally overlooked, mound smack dab in a popular Milwaukee park. It was probably the coldest action we have ever done, and we still get shivers thinking about the windchill of -30 on that evening, as we brought out our message, SACRED SITE, with a flip side of that same notion in Ojibwe, MIKWENIM. Our impromptu round dance was as much to keep warm as it was to celebrate the location, though we were happy that a news channel picked up the story that evening. Though the main resistance was in Madison that day with the dramatic convergence of the tribes, we did help to get the word out in a peaceful and poetic way. The bill was soon dropped.

NO MORE FLINTS has been on our mind throughout the last few years. There was a bill creeping its way through the State House that seemed to suddenly erupt into public consciousness. It would ease regulations around public water supplies, and allow global corporations to swoop in and buy water rights in municipal district – sacrificing long term water access and health for short term profit. People were lulled by the holidays and no one was talking about this sneak-privatization plan. We began some actions at the state capitol and along our beautiful Lake Michigan water front that we hoped would at least get people informed. This coincided with an unprecedented amount of behind-the-scenes organizing on a local and national level in order to stop this bill. The Republican sponsors were secure in their accounting of the votes to pass it, and were smug in their corporatist goals. The outcry grew, from a small few to larger groups concerned about water issues. It began to get picked up by local news, and then by friends around the state. Resistance actions were springing up throughout the region, and the bill, once assured of passing, was tabled. It is never over, but for now, we pushed back and they backed down. “No more Flints,” we say. But we don’t forget that Flint is still there, still reeling from the dire consequences of the corrupt practices of privatization. The fight over water continues…

While we always get charged up by a cause, or a call to collaborate with a group we respect, or a campaign against injustice, we also at times like to explore the creative and expressive dimensions of this medium that we invented. In June, we made plans with our favorite filmmaker to do some water-based stop motion footage. “Wouldn’t it be cool,” we thought, “to visit various locations around Wisconsin with messages about water!” That was a pretty ambitious idea, but we were able to do three amazing photo and film shoots on Lake Monona in Madison, in Europe Bay, Door County, and along the Milwaukee River. All of these sequences involved kayaks, boats, the complexities of getting large groups of people together, the durational endurance of time-lapse filming and some amazingly talented and dedicated people. Here’s the first part out of the effort, with more to come in the future. We think of it as a “love song to water.” Little did we know that within a few months, water issues would take national prominence out in the Dakotas.

We Are Water from Overpass Light Brigade on Vimeo.

By September, the occupation at Standing Rock had grown to be a sizable presence, at least in our social media and political circles. Activists from the area began to ask us if we were going to make a trip out to North Dakota, to join in the struggle against DAPL. Leading up to the Labor Day weekend, we planned an action, got some impromptu approvals, packed some light panels in the van, and readied ourselves for the long trek. It was an intense weekend, not only to see so many indigenous activists, water warriors, and water protectors living, arriving, and thriving, but to be there when private security forces sicced attack dogs on peaceful people. We negotiated more concrete approvals with Sioux elders in order to enable a few actions with lights and our strange “pixel stick” that magically displays programmed imagery when the lighted wand is swept across the sky. Some of these images went viral, and our Facebook site was hitting a 1.6 million person reach for the weeks after. In this way, and on this blog, we felt that we were able to help highlight the courageous and important work being done by so many indigenous Water Protectors and non-indigenous allies. Getting the word has been an important aspect of this struggle, since until only recently mainstream media all but ignored this massive uprising. 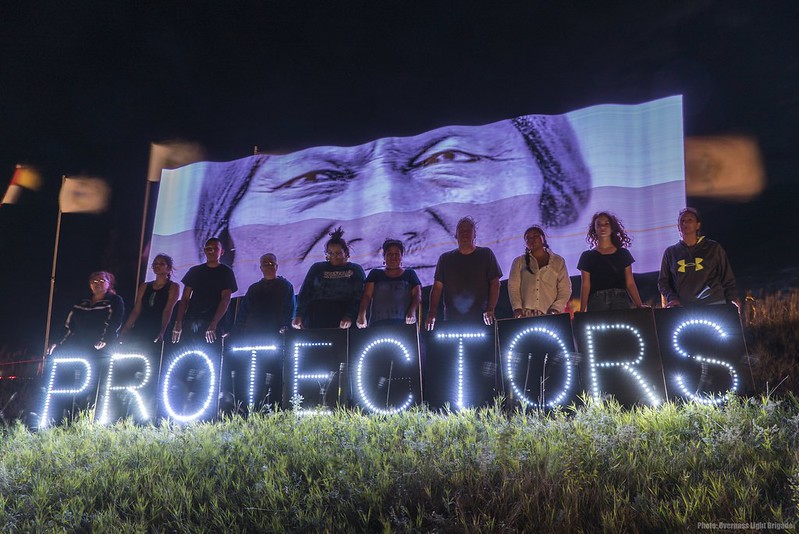 We returned in December and were amazed by the growth of the camps, the momentum of the movement, the complexity of the daily negotiations, and the incoming presence of over 3,000 veterans. The provisional “win” came the day after we arrived, with the veterans in full force in support of the Sioux and this amazing indigenous movement. We marveled at the celebration, the discipline of the Water Protectors in their unflagging commitment to nonviolence, even in the face of such extreme and violent repression perpetrated by police and other militarized forces under command of corporate power brokers and their political appointees. Indeed, that was why the veterans showed up, and their presence seemed to shame the State into at least a temporary hiatus of overt desecration. Due to circumstances, we weren’t able to mount another Light Brigade Action, but did have the backing to receive a much coveted press pass, and were able to take some fantastic picture for posterity.

And then the blizzard swept down the plains. We knew it was coming, and hightailed it out of the camps, moving east as fast as the wind pushed from the west. A few hours later, all roads were shut, cars in ditches, smart people hunkered down with cords of firewood dried and ready for the warmth of wood stoves. We drove home, back to our own water wars, back to the reality of our lives in Wisconsin, which has been the petri dish of the new America. We know what it is to struggle, and we know what it is to keep struggling when we feel that all is lost. We know that even when we win, as we have in the actions cited on this page, our wins might only be temporary, that the fight will come around again as soon as a politician craven enough to put a bad bill forward feels that no one is watching or that no one cares. And here we are, at the end of a year, a rough year, a bad year for art and poetry and song and water and climate and education and immigrant rights and electoral politics and democracy in general. And here we are, ready to fight, to organize, to make calls and write posts and hit the street and make videos and do what we can to take care of our sad and beautiful world.

So to all of our friends, our followers, our Holders of the Lights… Solidarity in the New Year. Help us to LIGHT THE WAY! 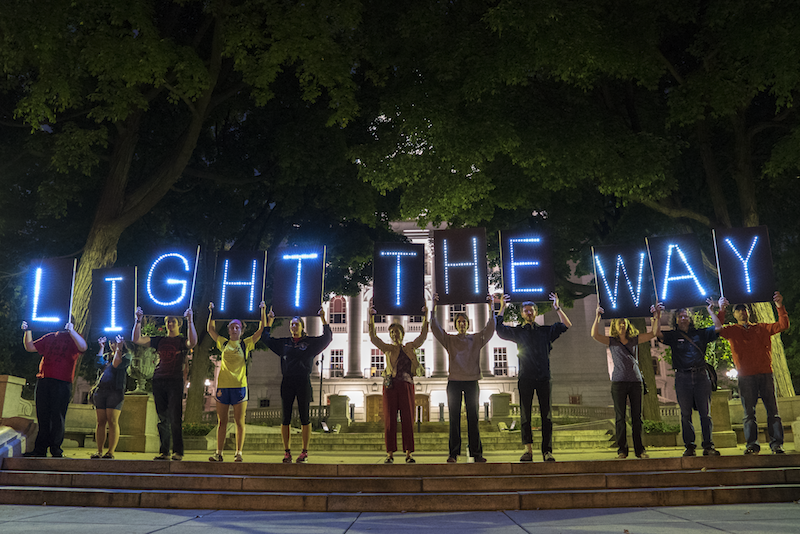