We arrived early to the eerily fortified University of Wisconsin, Milwaukee campus, cameras in hand. Police were everywhere, whole sections cordoned off with temporary metal barricades, motorcycle cops buzzed the neighborhood, and sniffing dogs, nose to the ground, moved in their purposeful patterns zigzagging their handlers behind them. Donald Trump would be appearing in a few hours, there to be interviewed for a Fox News event, in UWM’s modest 500 seat theater.

Students from different campus groups, Youth Engaged in the Struggle, SDS, UWM Black Students Union, Students for Justice in Palestine, African Student Association, Black Lives Matter, Community Uprise, among others, were gathering in the cool spring sun shining in Spaights Plaza, while ticket holders intent on hearing Trump began to line up near the single checkpoint to get inside the theater.

The protest began on the steps of the Golda Meir Library, a fitting frame for dissent. Their numbers swelled, and the cavernous library mall gave natural amplification to energetic chants and short staccato speeches. “The people, united, will never be defeated” gave the rhythm and background track to the message that “Donald Trump and his supporters know that what he is saying is hate speech, and we will not condone it here on our campus…”

At one point, the crowd surged forward a little in the direction of the line of (mostly) Trump supporters. Dozens of police rushed in. They created a line that blocked the protestors from any further movement. Things got tense very quickly. The police were everywhere, and the chants began to be directed at them and their presence at a peaceful rally in protest of the platform of hate that is now the official direction of the current Republican Party.

It was noted by several ACLU observers that many of the police had their ID badges taped over with black tape. Why was this illegal procedure necessary? Why was it necessary to bring out the mounted police sitting atop their horses, waiting to cut through a crowd of students? The real and symbolic show of force was clearly the message throughout the ensuing hours. Step out of the line that we draw, and you will be crushed.

UWM Chancellor, Mark Mone, said in an email last week, “Our campus is a place where free speech is valued, no matter how favorable or distasteful we view it. This is especially true when we consider our role as a public institution that is funded in part by state taxes. In effect, we have little flexibility to make leasing decisions that are based on different viewpoints.”

Though Chancellor Mone wasn’t present during the event, Vice Chancellor of University Relations and Communications, Tom Luljak, was. He was very upbeat about “such a great event, where “each side” has a voice.”

What a crazy conception of “free speech,” where the most visible proponent of a neofascist political campaign is inside an arts theater, promoting a very explicit regime of misogyny, homophobia, racism, anti-immigrant, anti-worker attitudes and rhetoric, surrounded and protected by an overwhelming force of militarized police, many of whom clearly desire a certain amount of anonymity. While outside, shouting in the sun and wind, are our students, the very ones who are the explicit targets of Trump’s hate-mongering messages. This is a very strange definition of the kind of open discourse that an institution of higher learning should endorse.

The afternoon was very intense, and it escalated to a crescendo as one student was dragged across their front line into a building. We couldn’t tell what happened, and no one was clear on what the issue was. The students were committed to staying in solidarity with that student and protesting the theater of hate inside.

So, just what should be the institutional response regarding the implicit endorsement of a man whose political ambitions are designed on crushing the lives of large segments of our student population? It is a complex situation when that institution is constantly hammered and defunded by the rightwing legislature in power, one set on a radical diminishment of higher education. Where are the people who will take a principled stance against the man who wants to dip bullets in pig’s blood for the execution of terrorists, who believes that Mexican immigrants are rapists and criminals, who feels that women who have had an abortion should be punished as criminals? Wouldn’t an ethical institutional response be “Thanks for the offer, Fox News, but we cannot provide the facilities for this event because we cannot even indirectly endorse policies that explicitly harm our students and their families.”

Neutrality is not neutral, and hate speech is not free speech.

We walked away, eager to process photos and video of the event. One of us turned to the other and said, cynically, “Wow, come to UWM, where we have the highest Police to Student ratio in the country!” The other replied, “Yes, and an excellent Equestrian Program eagerly supported by the crowd…”

Welcome to UWM, where outside in the sunny quad the free speech of students is patrolled by an overwhelming military occupation, and inside a Theater of the Arts, hate like clay is being sculpted into the Republicans’ new vision for America.

More of Joe Brusky’s photos from the protest can be found here: 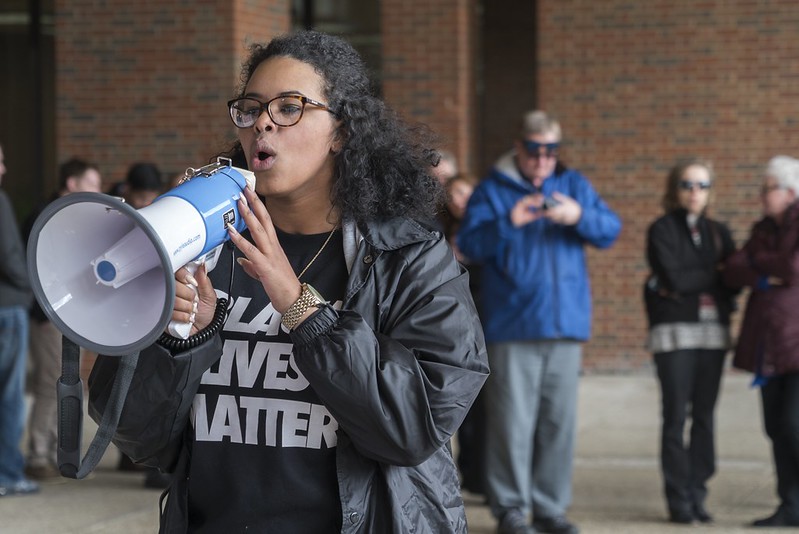