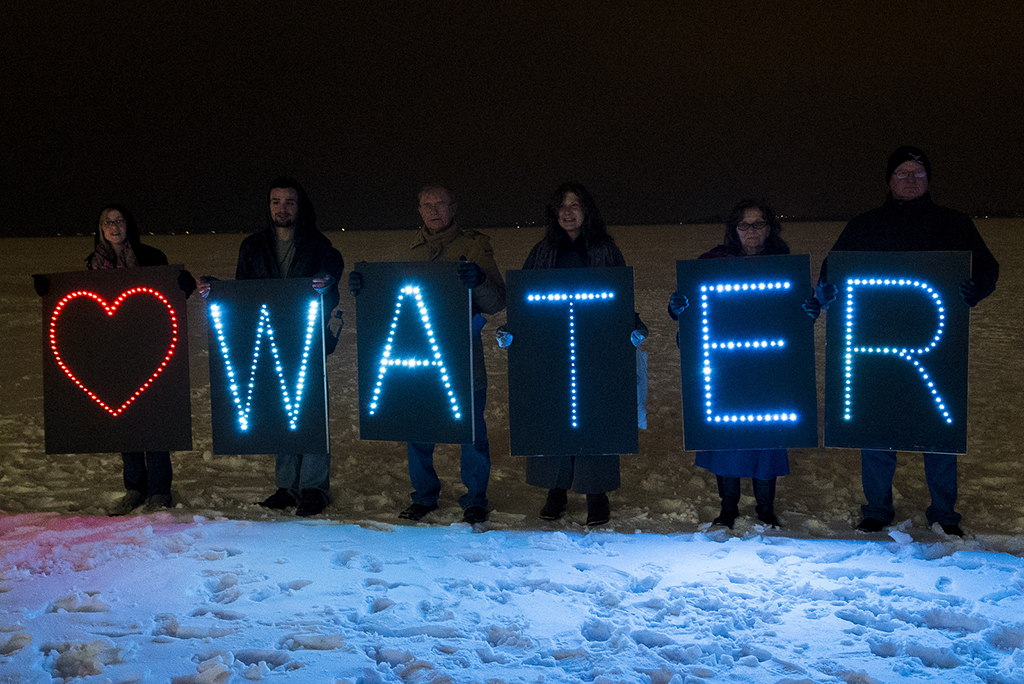 A reporter at Wednesday’s press conference in Milwaukee asked Senator Larson (D) a question about the validity of the comparison between the toxic poisoning in Flint, Michigan, and the Water Privatization Bill (SB432 and AB554) that is moving through the Republican controlled Wisconsin legislature faster than cherry pits through a coyote. “After all,” the reporter suggested, “Flint was a failure of government, right, so wouldn’t it be a benefit to have the government out of the picture?”

Ugh. We must read really different source material. Michigan decision makers prioritized profit over people, just as this Wisconsin bill will do. When Michigan’s governor placed Flint under emergency management, he took away all democratic rights at the community level, just as Wisconsin’s bill will do. Political appointees will make all the decisions, handcuffing local control, in Wisconsin just as in Michigan. The same austerity politics have put us on the same road, we just have different on ramps.

Any private corporation wants to maximize profits for shareholders. Aqua America, as an example, makes breathless promises about investing wads of money into infrastructure, but has a consistent record of deferring maintenance and abusing workers. Google it. Google Veolia. Google Nestle. Add the words “water issues” or “customer satisfaction.” See what you come up with!

Our Republican legislators will be long gone when you are number-pressing through some multinational’s customer service phone tree, trying to lodge a complaint about the dusky color of your tap water. Be sure to press the right number for English! How long are you willing to wait on hold? Have you ever tried to complain to Comcast? Try Veolia!

The bill came up for committee vote last Thursday, January 28. Chair Roth (R) was robotic, not veering from the party line, even when the Senators Larson (D) and Lassa (D) sought eight different amendments that were designed to put just a little more power into the hands of local citizens.  Republican committee members even rejected an amendment that would “at least limit bids to non-foreign corporations,” and another one to “at least let the public know the details of a takeover deal before they need to seek massive amounts of signatures to trigger a referendum.” Senator Stroebel (R) was absent for most of the meeting. He rushed in at the end, and said, “Place my vote with the Chair!” He felt that the Public Service Commission (PSC) will offer enough oversight, without recognizing that the PSC is entirely constituted of political appointees. All amendments were rejected, and the bill passed along party lines: 3 for, 2 against.

So now the Bill goes to the Senate floor for a full vote. The earliest possible vote is February the 9th. We all have work to do. Some of the Republican senators are not fully enthused about this totally unnecessary bill, especially senators in districts that have a lot of water issues. We need to convince a few of them that it is a bad idea, that there are political consequences. It won’t be scheduled for vote if they think they don’t have the votes, so the bill would die for at least a while.

Continue to call and email members of the Senate! Continue to respond by sharing information, talking with people and posting comments in public forums! The Senators below are the most likely to be persuaded, so write to them – especially if you are in their districts. If you know people in their districts, urge them to write. It really matters! At least we can make them remember that when our monthly bills go up and the quality goes down we will have them to thank; you know, the ones that felt somehow we were different from Flint.

Directory of Wisconsin State Senators
No matter your senator, be sure to contact him or her about your opposition to the legislation.