Driving up highway 13 the other night, just north of Washburn, WI, you might have seen a strange sight if you looked through the willow and dogwood and cattails and reeds towards the beach. Weird lighted letters were dancing down the coast, lining up on the sand bar where the Sioux River cuts into the frigid waters of Lake Superior. Even in late March, a cold bitter wind was whipping from the north, past the Apostles, through the gap that makes Madeline Island an island, through the fine gaps in our clothes, cold and crazy to be out for the final shot in a video poem dedicated to water. Intrepid Northland College students, game for adventure and undaunted by the weather, had donned rubber and neoprene waders, and were standing off the shore holding the message; WE ARE WATER. Those of us on shore laughed as small ice chunks floated by, between the shore and the standing students, driven by the icy wind. Away from the camera lights the velvet night was so dark that the sword of Orion poked down from the sky, low over the northern hills, so bright you could feel its edge. It was a beautiful way to end the filming of this three day project. We thanked everyone and drove back to Ashland, to check on our all night camera gear set up way out on the crusty ice of Chequamegon Bay, picking up the green flows of northern lights as the stars traced their linear journeys through the camera and over time.

It was a good three days in the north country. We had been invited by faculty at Northland College to give some lectures and workshops about “art and social change,” which we were more than happy to do, though we also proposed to make a short movie with students and community members. It seemed much more exciting to generate new work with students than to talk at them about our previous projects. The college is small, with only about 600 students, but very centered on social justice and environmental science. There is a purposeful feel to it, and on our first day our noontime discussion of the project went really well. We talked about tactics and generated a messaging list for our night shots, and got some voice-over readings and recordings of the phrases in the nearby radio station sound booth. Our filmmaker friend from the Twin Cities had joined us, and he wanted to begin shooting out on the ice well before sundown for some drone shots and video portraits. The lovely 55 degree sunny day didn’t help firm up the footing on the crusty ice, though it still seemed safe to walk on, especially in the shallows of the massive bay. People, mostly older community members, began to arrive at 6:30 and we got video head shots in pink and orange light of the setting sun. 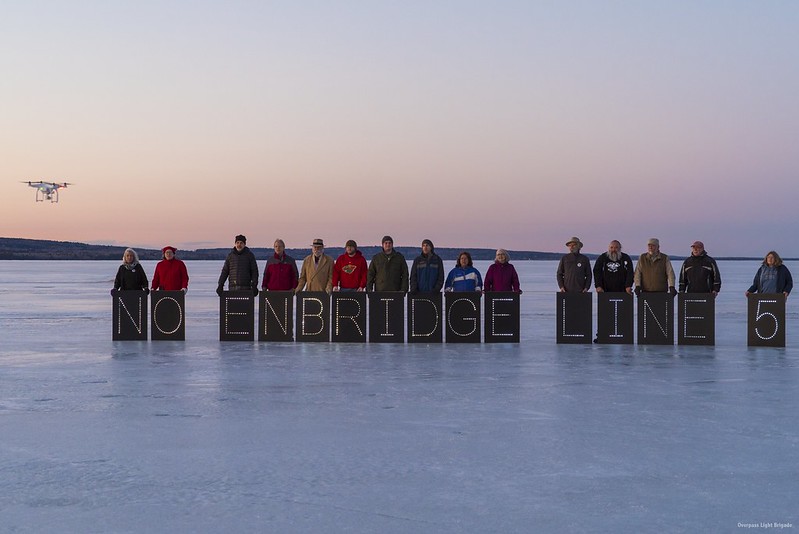 We then pulled out the message NO ENBRIDGE LINE 5 and took it out onto the ice. The drone buzzed like a giant robotic mosquito, getting some powerful aerial shots on the massive expanse of ice. As the sun rapidly set,  the emerging darkness brought out the beauty and brightness of the light panels. We choreographed a lot of messages relevant to water, and were packing it up around 10:00 pm when another shift arrived, a group of students. They continued holding more messages and action words such as RESIST, MARCH, PICKET, BLOCKADE, and phrases like WE ARE ONE, and WATER PEOPEL RISE, well into the late night hours.

The next day broke much colder. Springtime winds swept down from the Canadian shield, but everyone was still game to continue the video shoot. The students we drank beer with the night before in a brew pub in Ashland came out to the ice flats, we built a big bonfire, and continued the fun, running around on the ice with the letters like a bunch of frigid fools, ice dancers, people who care about the world, water people. At one point, seventy or so letter panels lay on the ice, face up, illuminating the night, reflected as a blue glow on the ice, while the bonfire glowed orange in a puddle of its own making, and people ran around with illuminated words, following a dancing man with a camera shooting and shouting and everyone laughing… We saved the “wader shot standing in icy water” for last, since we weren’t sure we could pull it off in the harsh conditions. But we did. They did. The students. The community. All of us.

Sometimes words fail to adequately describe the beauty of a location, even when they are lit up on a frozen lake and held by a wonderful array of people. Compelling pictures and videos of trenchant messages in physical space will be generated by our days “up north,” but the real message is in the power of people coming together, to stand in solidarity – even on the ice – and be present in the poetry of the moment with such hopeful representations as WATER PEOPLE UNITE, and (with the earth, the night sky, the fish lazily swimming beneath the blue ice, the crows black in their skeletal trees, Orion’s belted sword pointing down to sacred hills, the people together in spite of the weather) WE ARE WATER… WE ARE ONE.