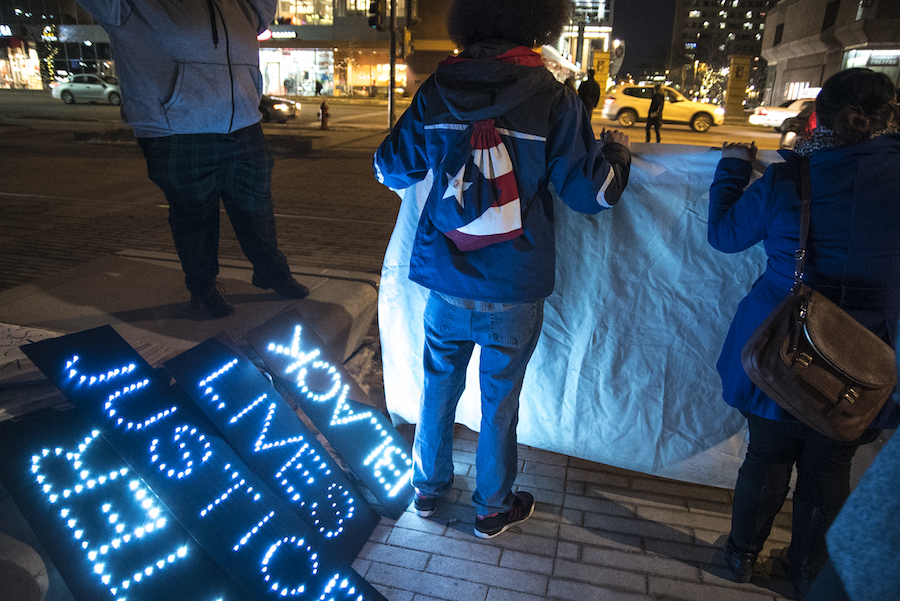 The Young Gifted and Black Coalition out of Madison, WI, has been making public calls for reduced policing and incarceration through rallies, marches, and speakers for months, and OLB was excited to have the opportunity to finally join them in their fight last Friday night.

When we arrived, we laid our lights out and almost immediately people began pouring out of Elvehjem Hall on the University of Wisconsin campus, where a large group had just listened to a lecture on community policing. A massive white banner with words “Black Lives Matter” boldly painted in black was unfurled while megaphone chants began. “It is our duty to fight for our freedom. It is our duty to win. We must love and protect each other. We have nothing to lose but our chains.”

Once everyone had a sign we marched out into the middle of University Avenue, a main thoroughfare, blocking all six lanes of traffic. There the demands of the group were read out loud for all to hear:

1) That the $8 Million proposed for the jail study be taken off the table, and invested in resources and initiatives led by Madison’s Black community.

2) The immediate and permanent release of 350 Black people who are currently incarcerated for crimes of poverty.

3) The end of solitary confinement, which exacerbates mental health problems for all people.

The powerful evening ended with the group calling for continued pressure and action before leaving their spot on University Avenue. The coalition’s actions have already been successful in opening up some dialogue with Madison’s police chief and although the two sides agree on many of the issues that face young black youth today, there is considerable distance on how to best remedy those problems. It is inspiring to see the coalition begin to place necessary pressure to change on those in power, and we look forward to continue helping them in their quest for justice.