It is an odd sense of deja vu. Hundreds of people pack the hearing room in the Wisconsin State Capitol throughout the day. Mostly, the GOP legislators look bored, play Candy Crush on their laptops, smirk from time to time at the heartfelt testimonials pouring forth from citizen after citizen. Their indifference always makes us want to weep or start a revolution. Robin Vos, progenitor of the whole scam, didn’t even show up to advocate for his new laws that are specifically designed to leech power from the newly elected Democratic governor, Tony Evers. Angry people crowd the hall outside, registering stacks of preprinted cards in opposition to the whole set of acts, chanting the careworn Shame chant, and intersperse it with the more applicable “Respect Our Vote! Respect Our Vote! Respect Our Vote!” We understand the whole charade to be performance, but it is great to hear the rumble and roar, reminiscent of when we took over this beautiful building at the beginning of Walker’s reign of stupidity.

We arrived at 5:00 pm, making the long drive from Milwaukee in record time, and parked near the iconic bronze statue, “Lady Forward,” wondering why, whenever we seem to respond to the need for a Light Brigade action, it is so cold and windy in Madison. In spite of the frigid winter wind, hundreds of people showed up to help, eager to hold letters, stand in solidarity, take pictures, chat with old friends. Our messages greeted everyone as a steady stream of folks climbed the stairs to attend the larger planned protest nearby. 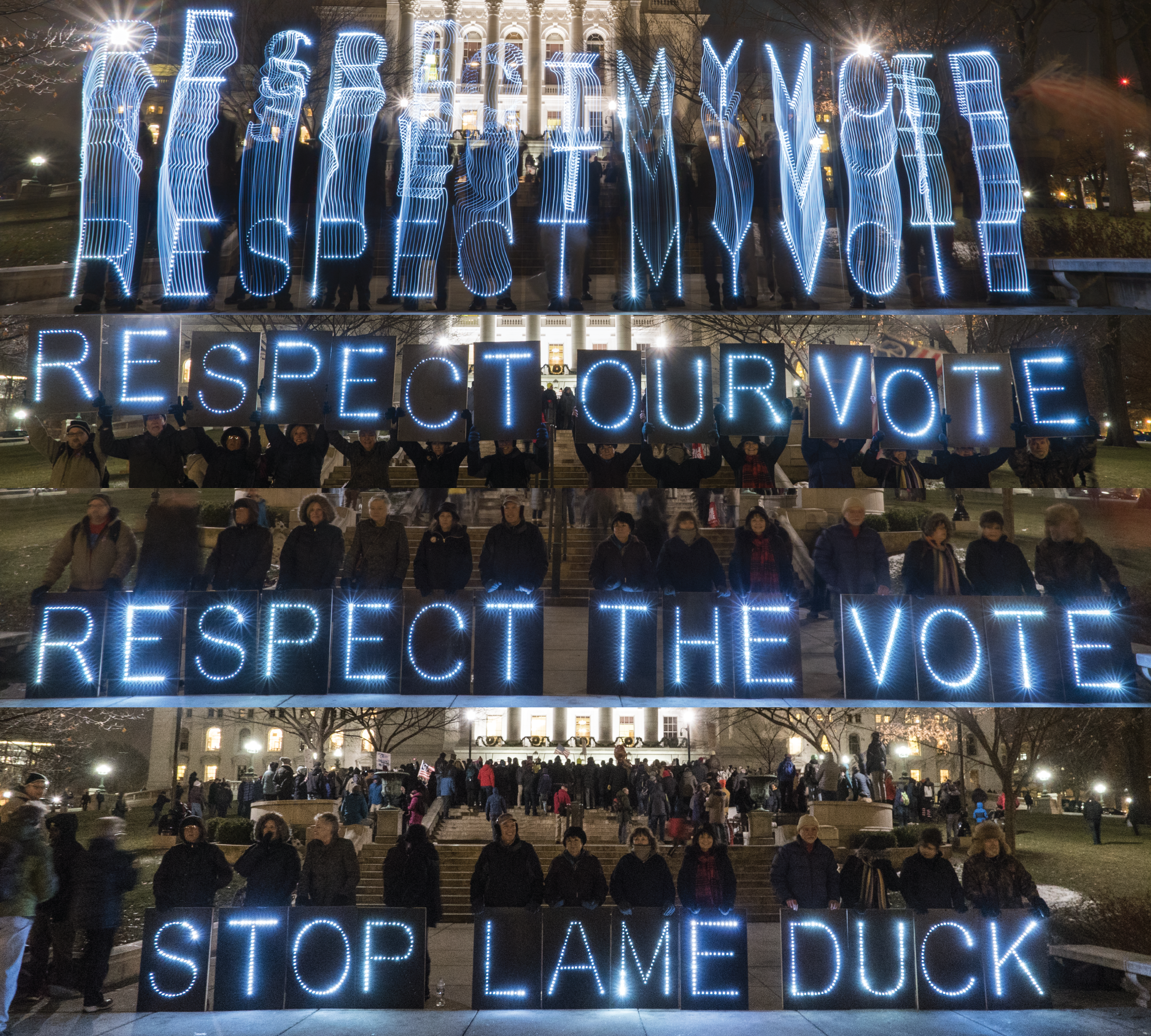 We brought out our Pixel Stick, which is a programmable light wand that, when walked across the stage, displays an image. It is pretty cool. The wand plays the “Y” axis of the image, and a person walks the “X” axis. The camera on a slow speed, coordinated with the stick, captures the image as if it is magically wiped into space, kind of like a reversed scanner. In this case, the image was of our three criminal miscreant Republicans: the soon to disappear dull-boy face of Governor Walker, the thuggish human-iguana face of Scott Fitzgerald, and the eminently punchable face of Robin Vos. These air-wipes were choreographed over the message STOP LAME DUCK. The rally speakers boomed behind our messages. There was anger in the cold December air.

After a couple of hours, we packed up the lights and gear, and listened to the last of the speakers railing about the injustices of New Republican Rule. We went inside to the 4th floor of the capitol, way up in the dome, to get a sense of the energy of the public hearing. One man was just being forcibly ejected from the proceeding. The cops had hands on him, one on each side, one in front, two in back, and they escorted him out of the building. Later, I saw him standing around and asked him what happened. He said that during his testimonial, he kept going on after his allocated two minutes. He was told that his time was up, but he continued. They interrupted him again, and still he persisted. They stopped him more emphatically, and he loudly replied to them: “You aren’t legitimate. This hearing is a sham. So why should I follow the rules if you don’t?!!”  It strikes us that this is one of the long term damages of our current state of affairs. We don’t always get our way in any democratic process, but when we see systems being abused with such bare naked power grabs, and witness the corruption and indifference of those responsible, we lose faith in systems of governance and underlying operating principles. This longterm erosion is a cancer that is rendering consensus and majority procedures meaningless. It is not necessarily easy to fix broken things.

And that’s how it is. The bills, except for the stupidest most expensive one that changed election dates in order to assure a rightwing judge his seat on the bench, all passed from committee. They will be voted on today. Call your legislators! Some lowly intern will lodge your call; they have to by law. Is it fruitless? Yes, honestly… yes. But we struggle against this assault on the foundations of our representative democracy because we have no other option, and history is never over. So call your representative. Call Vos and Fitzgerald’s offices! Send emails: the addresses are all over the internet. Go to the capitol if you can. Talk to your neighbors and friends about decency in losing and fairness in the peaceful transition of power. Post and share things on social media. All that you do matters, if not in the short run of this cynical sham, in the long run of our beleaguered electoral democracy! 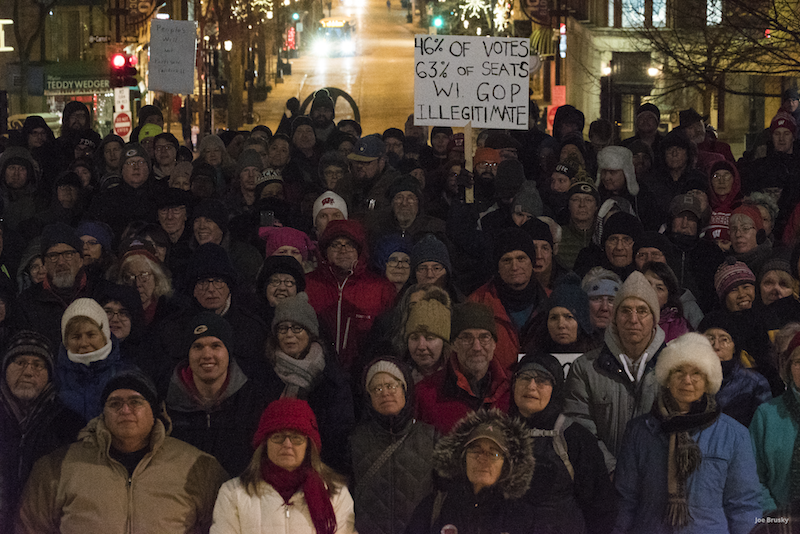 The Republicans exist as a majority due to their radical gerrymandering of the electoral maps. They are doing all that they can to remain in power; a minority’s desperate aggression to maintain absolute control. It won’t last forever. Soon, all those faces wiped into the sky will disappear, as their entire apparatus will crumble, leaving nothing but taint. As a friend said in his testimony yesterday:

“It takes a long time to build good stuff. It’s not hard to knock it down. You are all a bunch of vandals.”