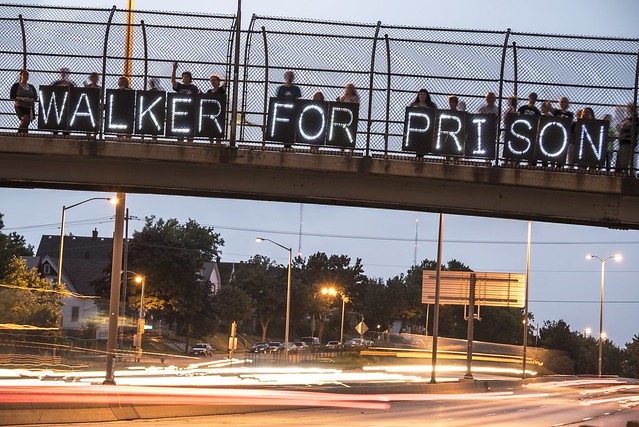 We’ve been in the streets fighting the corruption of the Walker regime for four years, trying to inform the state and the nation about his sociopathic personality and failed Koch-driven policies. It was great to get back to our roots tonight, back onto a bridge over I-43 in Milwaukee, and what a treat to see so many people show up, in spite of the late notice of the action and the impending storm. There were some old friends, and a number of brand new Holders of the Lights, as well as a mix of oldsters and youngsters. It was a real bridge party as we held the message for massive response by passersby, but when the rain began, we got a little nervous. You feel a bit exposed up there, especially when lightning is crackling in the not so distant west, and clouds are rolling towards you. We were packing the lights into the van when the rain really began to come down in solid sheets, a real deluge. We haven’t been kicked off a bridge by the police in ages, though some serious lightning sent us packing!

With his presidential ambitions fully formalized, Scott Walker is now the nation’s problem. We find it comical that today Governor Walker declared his candidacy for the United States, because the way he’s run Wisconsin in the last four years, he is better suited for prison.